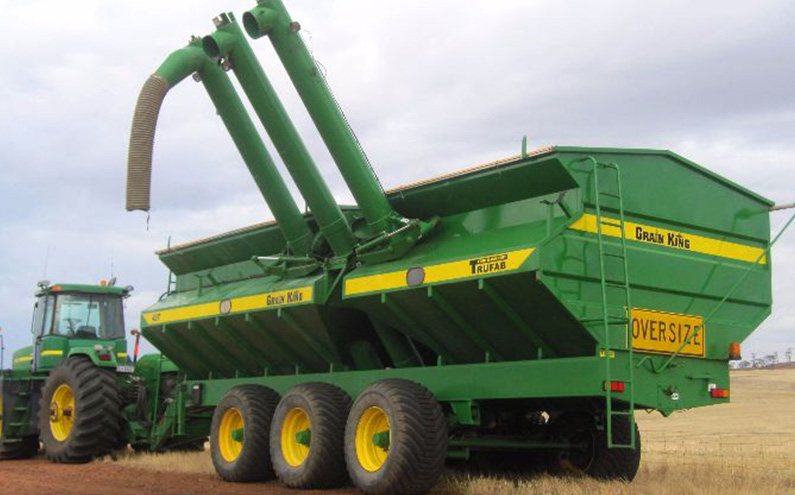 “We had two old five-in-bins and old trucks,” he said. “What I wanted was one bin that had the capacity to fill the box over three shifts to make refills more efficient and faster,” he said.
So he approached Cunderdin manufacturer Trufab to design a bin with three compartments and three augers to simultaneously discharge seed, compound fertiliser and urea into the air seeder.
The result was Trufab’s first triple axle seed and super bin with a capacity of 45 tonnes.
“It solved our issues and we also can use it as a field bin at harvest,” Walter said. “At a pinch it can be used as a chaser bin on flat country.
“Now it only takes us five minutes to load the air seeder whereas it used to take between 45 minutes and an hour using the five-in-one bins.”
While Walter sparked Trufab into action to build the triple axle bin, the company has always had a focus on matching its bins to increasingly bigger capacity equipment.
Timing, of course, is the essence and as cropping programs increase so does the demand for large, mobile capacity infrastructure to minimise re-fills.
The Trufab Grain King triple axle seed and super bin meets this demand.
It has been designed with front and rear-steering axles and brakes.
The three compartments provide farmers who are not into liquid nitrogen to carry urea for deep banding at seeding.
Specially designed stainless steel 30cm diameter augers enable fast discharge rates with in-cab and auger-mounted controls for loading and unloading.
The augers are designed with self-closing weather caps to completely seal the bin from the weather when used with a heavy duty roll tarp, which comes standard on all Grain King bins.
There also is an option for auger-mounted flood lights for night work.
Grain King Seed and Super bins also have the ability to be used as a fire-fighting unit once fitted out with the fire-fighting option.
This comprises two 400L poly tanks, 25m fire-fighting hose on a poly reel, Honda Davey pump and a Quickloc easy filling inlet with breather.
The bin is made from heavy duty gauge material painted with top quality two-pack epoxy paint, providing protection against corrosive properties in fertilisers.
Get the extended version of this case study.