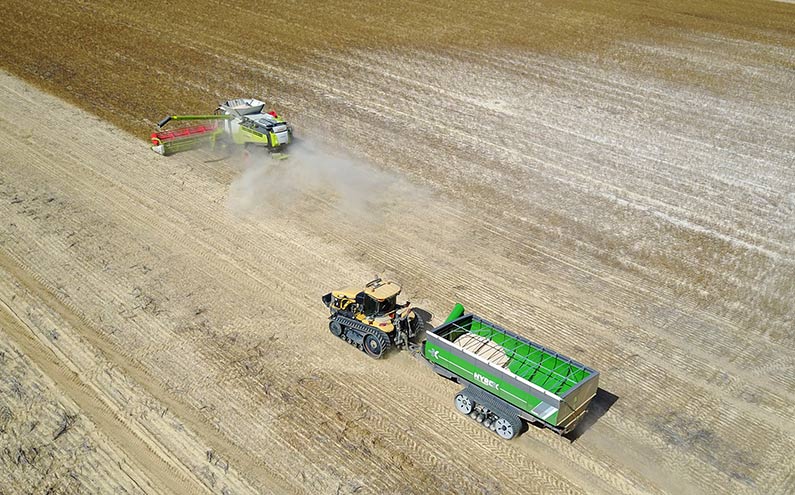 Recently, the largest NYREX Chaser Bin made by Trufab Global to date was dispatched from our yard. It was 62,000 litres, including the entire range of standard features the NYREX offers, sitting on the Sly Intelligent Multi- Use Track System supplied by Sly Agri.

Earlier this season Mingenew Farmer Sam Ward trialled the 56,000 litre tridem axle NYREX Chaser Bin. Mr. Ward’s farm could be described as being in the middle of sand plain country, and this factored in with the farm implementing a mouldboard plowing plan creates extreme softness on his property. Mr. Ward reported that the wheels on the tridem axle punched into the sandy ground, leaving wheel ruts up to 300ml deep, the results of this lead Mr. Ward to purchase a track system with his NYREX.

Since receiving his NYREX Chaser Bin fitted with Tracks Mr. Ward stated he has noticed a massive difference, noting that the pivot points allow the tracks to walk easily along his paddock, so much so he claims he can hardly feel the bin behind him.

If you have been following Trufab Global for the last year, you would know that we have trialled three types of tracks until we found the set that we considered the most suitable for our customers.

The Sly Intelligent Multi- Use Track System (IMTS) was developed for the use in trailed applications, enabling a contouring movement using simple hydraulics to tension the tracks while pivoting joints work to reduce shock loading’s to the frames, and Chaser Bin.

The Sly IMTS has been designed to contour along the ground, similar to that of a caterpillar. This contouring movement restricts any bouncing movement or leaning when taking corners. Unlike other track systems that do the same, the Sly IMTS system can move into deep cavities and over large ground disturbances ensuring the drivers comfort, and the bins longevity.

As per all NYREX Chaser Bins, ones fitted with tracks will still feature brakes as the Sly IMTS has drum brakes located in the back wheel, which is simply powered through the tractor and activated via hydraulics, ensuring your safety as a priority.

The Sly IMTS is available on the entire NYREX Chaser Bin range. Please contact us, or your local dealer for more information.