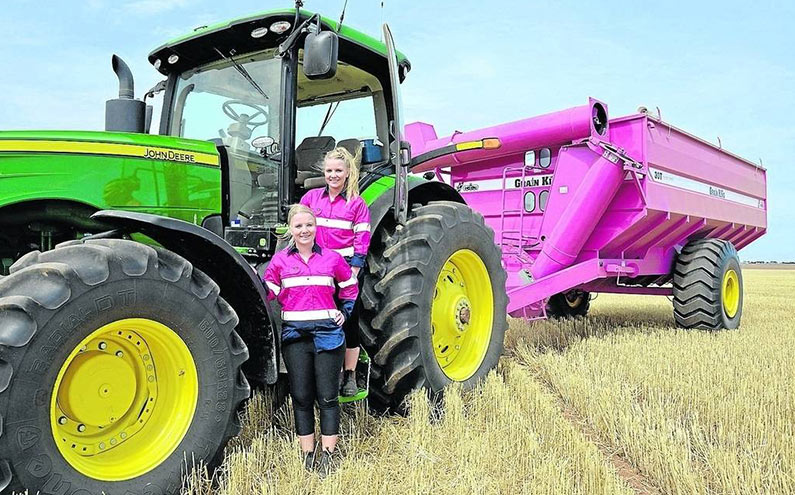 PINK isn’t the manliest of colours, but two SA farmers are prepared to don the hue on their chaser bins for a good cause.
The story behind the pink chaser bins starts with a trip the Crossville Ag Bureau made to the WA wheatbelt.
The trip, dubbed ‘Crossville goes west’, took place from September 15 to 22, with 22 farmers taking the opportunity to meet some of the best and the biggest grain producing farmers in the west.
While the main goal of the trip was to learn how to tackle issues related to soils and weeds, the excursion included visits to several farm machinery manufacturers.
One of these manufacturers was Trufab Farm Machinery, whose products are distributed in SA by Ramsey Bros.
Trufab Farm Machinery build Grain King chaser bins and Crossville Ag Bureau member Ben Ranford, who was on the trip, had ordered a 30-tonne bin, which the company was about to start building.
The standard colour of these bins is green and yellow, perfectly matched to Mr Ranford’s John Deere tractor.
But, while they were visiting the manufacturer the ag bureau members noticed two bins painted pink.
Asking about the choice of colour, they soon found out Trufab hire the bins out to farmers and part of the hire fee is donated to breast cancer support charities.
From there on in, the peer pressure began for Mr Ranford to get his bin the same colour.
He set them a challenge. If they could raise $10,000 to donate towards breast cancer research and treatment, he would change his chaser bin order for delivery in hot pink.
That figure has already been met, and now a fellow farmer is joining in.
Ag Bureau of SA state secretary Andrew Kitto pledged to also go pink on his chaser bin if $20,000 was raised.
Glencore has also come on board and is helping collect funds.
All farmers need to do is mention the Crossville Ag Bureau when contracting their grain with Glencore and 20 cents/t delivered will go to the cause.
Get a free quote now