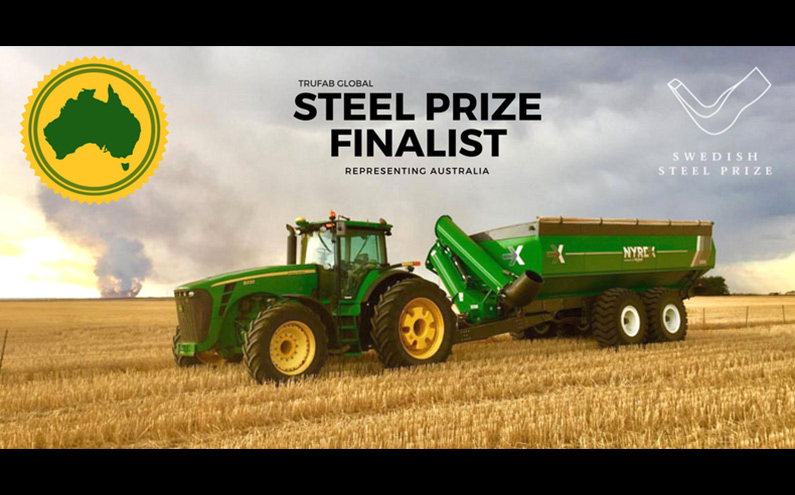 The West – Trufab Global up for Swedish Steel Prize

You Are Here: Home » Agribusiness » The West – Trufab Global up for Swedish Steel Prize

A small central Wheatbelt machinery manufacturing business is making its mark on the world stage by being short listed for an international award.

Cunderdin’s family-owned Trufab Global is Australia’s only finalist in the Swedish Steel Prize for 2018, to be announced in Stockholm on May 24.

For this prize, judges look for high-strength steel to be used in a way that challenges traditional design and creates the highest levels of performance.

Trufab’s nomination is for its new Nyrex Chaser bin, which features a modular design, using almost no welding.

The bins, manufactured from light and extremely durable Strenx steel, in a range of sizes, reduce grain discharge times and energy use, and minimise soil compaction on farms.

He said the lighter bin meant it could be moved faster across paddocks. Meanwhile, its flexibility in design could better absorb the bumps and knocks associated with rough on-farm terrains.

Since going into production in August 2017, 50 Nyrex bins have been sold and there are orders for a further 65. The company is about to start an interstate sales push.

Mr Jorgensen said its modular construction meant the Nyrex could be delivered in kit form, reducing freight costs and enabling Trufab to compete in the eastern states and international markets.

Other finalists include a truck-mounted sky-lift from Italy, a cutter for clearing roadside vegetation from Finland and a new lightweight trailer from Italy.